By browsing Carbis Bay Holidays, you agree to our use of cookies

POPULAR REGION! A property was booked in Cornwall 22 minutes ago

In line with recent government advice bookings are only

This property is very popular

Jump to next available date

{{ getButtonHeading() }}, however the property is available from {{ getReadableChangeoverDay() }}

There are no prices available for the dates selected.

Compass Point is a prestigious development of purpose-built luxury apartments, situated in a prime position on the seaward side of Carbis Bay, with the majority of properties offering stunning views of the sea and surrounding coastline.

Guests will fall in love with Amethyst. With its views of the sea and ideal position close to the beach who could blame them? Like Carbis Bay...a treasure waiting to be discovered! Quality furnishings throughout, the latest in entertainment facilities and a stunning coastal backdrop to the living area and master bedroom. The perfect combination for a fabulous getaway to Cornwall. Highlights - Amethyst is located in Compass Point apartments in Carbis Bay and is on the first floor. - Arrival 5pm, departure 9am. - Children welcome. - Regret no pets. No smoking. - Sea views from the lounge and master bedroom. Entertainment - Complimentary super-fast fibre optic broadband wireless internet. - 49” LED Smart TV with Freeview to living area and LCD televisions to bedrooms. - Playstation 3 with selection of games. - Mini Bluetooth HiFi system. - Blu-Ray DVD player with selection of DVDs. - Selection of board games, library of books, O.S. Maps and information on the local area. For Families - Complimentary travel cot and high chair available. - We request that guests' provide their own cot bedding. Access - Access to Amethyst from the rear car park is down 36 steps, then through the lobby door and up one level via 16 steps. - Detailed access statement available on request. Parking - Private allocated parking space. Additional parking for visitors' is available on a first come first served basis. Living Area Lounge The living area has wonderful sea views across the bay towards St. Ives which can be enjoyed with the provided binoculars. These can be enjoyed from the two cream leather tub chairs which are an ideal spot to relax with a good novel...if the views don't distract you. There are also comfortable cream sofas laden with turquoise scatter cushions which compliment the coastal views and the cosy rug laid on the wooden floors. The entertainment in Amethyst is top notch! There is complimentary super-fast fibre optic wireless broadband throughout so that guests' can stay connected and a 49” LED Smart TV with Freeview, Blu Ray DVD player and a Playstation 3 will keep everyone amused. There are also a selection of games, Mini Bluetooth HiFi system and DVD. Dining Room The dining room is accessible from the hallway and has an oak table with four chairs, and a high chair for younger guests. For those who wish to self-cater, there is a Tesco and Marks and Spencer nearby, as well as a selection of fabulous farm shops selling local Cornish produce. The sideboard in the dining rooms contains books, board games and a wealth of local information about St Ives and West Cornwall to help you plan your stay. Not forgetting the DAB radio so you can tune into radio Cornwall while you dine. If you prefer to dine out, then the acclaimed Porthminster Cafe can be reached via a beautiful walk along the Southwest Coastal Path. One of the best beach cafés in Cornwall, and a favourite of our guests,' this is not to be missed. There is a huge choice of other recommended eateries in St. Ives and why not try out a really traditional Fish and Chip restaurant: "Becks" in Carbis Bay? Kitchen Kitchen Amethyst has a fully fitted modern kitchen with quality integral units. There is a Neff hob and oven, a microwave, dishwasher, washer/dryer and separate fridge/freezer. There are also plenty of utensils and cookware to allow guests' to self cater in style and on the work surfaces are a kettle, toaster and coffee machine - everything you would expect in a home from home. Sleeping Bedroom One with En-suite Bedroom one has the very same sea views as the lounge and boasts a luxurious king size bed with high quality bed linen. This combined with the choice of curtains and/or blackout blinds, provides for a restful sleep. You will not want for storage space here as there is plenty available in the generous wardrobe, chest of drawers and bedside tables provided. For entertainment, there is a 40” LED Smart TV (Freeview HD with built-in apps including iPlayer/ITV Hub/All 4/Netflix(subscription required). and a DAB/FM alarm clock radio and separate alarm clock to the bedside tables. A travel cot is available for younger guests,' we do ask however that you provide your own bedding for this. Bedroom Two This room is located close to the main bathroom and has two single beds dressed also with sumptuous bed linen. There is also a 19" LCD TV with Freeview and DVD player along with an alarm clock for guests who wish to use it! Whatever time of the year that you plan to visit Amethyst, you will be delighted with one of the highest quality self catering apartments in the area. A hairdryer is provided in both rooms. Bathrooms Bathroom One The main bathroom of Amethyst has a wash basin, WC and a Jacuzzi bath with power shower. There is a heated towel rail and modern bathroom fittings. Bathroom Two This bathroom is en-suite to bedroom one and boasts a power-shower, WC, bluetooth speaker and wash basin. There is also a heated towel rail. A bath sheet, bath towel and hand towel are provided for each guest, along with White Company toiletries. Outside There is a communal terrace for guests' to enjoy the panormaic sea views. Two folding chairs are provided within the apartment for your use along with beach mats and a cricket set, perfect for taking down to Carbi Bay beach which is just a short stroll away. 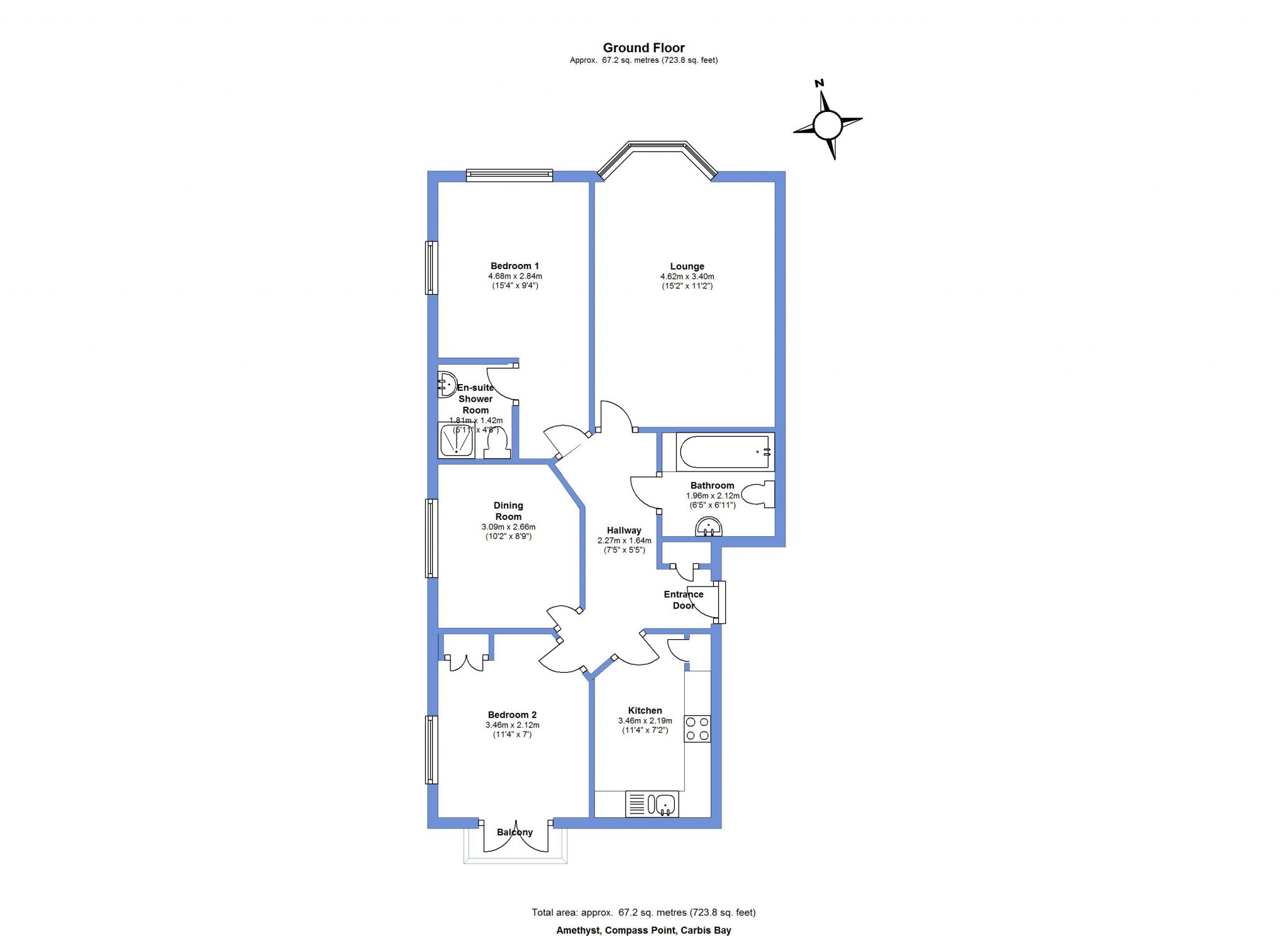 Note: This property has a Good Housekeeping bond of £100.

Just a short drive from iconic St Ives, the seaside town of Carbis Bay is best-known for its beautiful stretch of pure white sand. With turquoise waters and sheltered conditions, the beach feels almost subtropical and is the perfect spot for a good old-fashioned day by the sea. The beach is also home to the Ocean Sports Centre, so if sunbathing is not really your thing, why not hire a kayak or SUP and get out on the water instead. Or why not treat yourself to a Spa day at the boutique hotel which overlooks the beach and has a fabulous terrace where cocktails can be enjoyed in the Cornish sunshine? Carbis Bay has a small range of local shops and restaurants as well as a fish & chip takeaway and railway branchline. The train journey from Carbis Bay into St Ives is perhaps one of the most beautiful in the country.

There is a Good Housekeeping Bond of £100 for this property. Access to Amethyst from the rear car park is down 36 steps, then through the lobby door and up one level via 16 steps.

Are you on the phone to our call centre? Your Customer ID is: 7tuj124t